Tom views art in a very broad sense. Anything artfully crafted, whether it’s good wine, hand-cut crystal or a one-of-a-kind oriental rug, falls within his definition of art.  The medium isn’t particularly important either.  Tom enjoys everything from visual arts to decorative arts to performing arts.

Ask him to name a few of his favorites in a given category and he has trouble.  As Tom puts it, “It’s hard to name my favorite in any category because so much depends on the atmosphere and environment at the moment.  I most enjoy these experiences when I’m with good friends.” That might include taking in a touring art exhibit at one of Pittsburgh’s many museums, sipping the latest release from a favorite vineyard or catching a world-premiere at The Pittsburgh Public Theater where he’s been a season ticket holder for the past 15 years.

His thrill is to find items that are slightly off-the-beat-in-path.  So, when pushed, he’ll admit to having a fondness for Kinsale Crystal – deep-cut lead crystal cut by hand and sold only through their tiny West Cork shop in Kinsale, Ireland; wine from Frank Family Vineyards – a NAPA vineyard with roots dating back to 1884 and reimagined twenty years ago by long-time Disney Executive Rich Frank; Balvenie Single Malt Scotch , the only distillery to maintain and operate a working floor malting in the Scottish Highlands; and Anne et Valentin eyewear, launched in France in 1997 with the slogan delighted to be yourself and often described as wearable art.

Ideally, Tom likes to combine sensory experiences.  For instance, on a 2014 trip to Italy, he visited the Vatican to absorb world-renown Renaissance art followed by a tasting of the wines of Campania in Southern Italy followed by a visit to the fishing village of Cestara to indulge in the delicacies of locally caught anchovies.

One of Tom’s most treasured art-related travel experiences involved a trip to New York City where an art-collector client facilitated a meeting with artist Frank Mason’s widow, Ann.  Ann still lives in the quirky walk-up in Little Italy that she shared with Frank for more than 50 years.  The space is jammed with scores of Frank’s paintings and unusual items like a potbellied stove and a life-sized replica of the Venus de Milo (which has been sitting in the exact same spot since the Masons moved in).

The afternoon was topped off with lunch at one of Ann’s favorite places in Little Italy, a stop for cannoli at an Italian bakery and Tom’s purchase of a Frank Mason drawing that is now framed and hanging in his master bathroom.

The same art-collector client who introduced Tom to Ann Mason, helped facilitate the selection of artwork displayed in Herbein’s Pittsburgh office. In April 2014, the Gulf Tower became the new home to the downtown office and the decision was made to showcase Pittsburgh as a theme.  Artwork from various Pittsburgh artists can be found throughout the space: steel mill scenes by Ron Donoughe line the wall behind the reception desk; in one of the conference rooms, Pink Sky at Dusk by Phil Salvato depicts a field in Sewickley; Clairton-native Robert Qualters’ vibrant rendering of the Allegheny County Jail greets visitors on one end of the main hallway while Jim Prokell’s sculpture Private Moment (pictured here) is at the opposite end. Head into the kitchen – also known as Café Herbein - and you’ll find Burton Morris’s iconic Coffee Break (as seen on 40 episodes of the TV show Friends). Pittsburgh photographers are also in the mix with several David Aschkenas photographs of Highland Park in the main conference room and one of Mark Perrott’s haunting black and white tribute shots of Eliza Furnace in Tom’s office.

Tom’s love of art can also be felt in his downtown Pittsburgh condo.  A couple of his favorite pieces include an abstract called Waterfall by Pittsburgh artist and handwriting expert Michelle Dresbold and  Preserving Tradition by Caroline Rust, the winner of a juried art show at Point Park University a few years back.

Tom holds a BA in Administration and Management from California University of Pennsylvania where he was named Liberal Arts Alumnus of the Year in April 2011.  He also holds a Masters in Taxation from Duquesne University and was a Pittsburgh 5-Star Wealth Manager Individual Tax in 2010, 2011, 2012 and 2013. 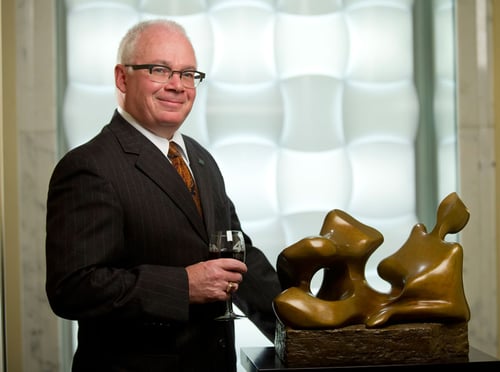